Free Shipping on orders over $100*

Does Putting Rock Salt Down A Drain Stop Root And Plant Growth?

Rock salt has been known to kill tree roots and plants but using a liquid crystalline slurry of rock salt in sewer pipes will typically flow right past the roots without killing them – many times never even contacting the tree roots since most root intrusion occurs from the top of the pipe (not the bottom of the pipe). In addition, rock salt in crystalline form is likely to make your blockage problem worse as the salt crystals can magnify the root blockage causing more damage to your drainpipe than good. 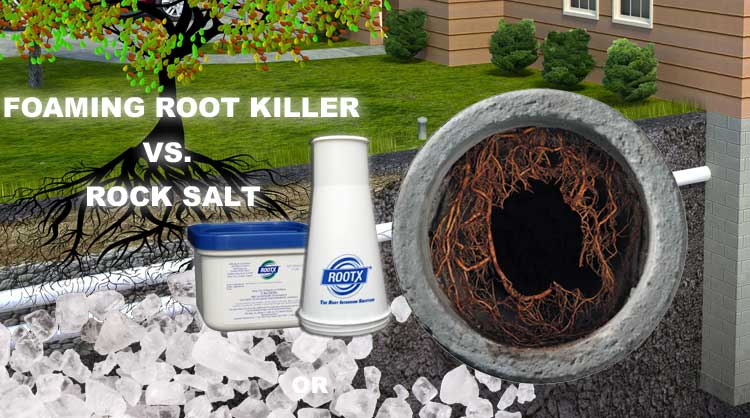 A quick short-term fix for pipeline or drain blockage from roots could be mechanical root cutting or hydro jetting, however cutting or jetting the roots is typically a short-term solution to restore flow caused by root intrusion. Cutting the roots in a pipe is like pruning or trimming a tree; cutting the roots can actually stimulate new root growth creating new fine, hair like root growth that will concentrate in a local area in your pipe. This hair like root ball will eventually clog your pipe if not treated properly.

If your lines are completely blocked or if this is the first time treating your drain lines for roots, mechanical cutting is a good first step to remove the root mass and restore good drainage right away. However, mechanical cutting should be followed by a treatment of RootX foaming root killer to keep the problem from coming back within a few months.

Treating pipes with RootX after a mechanical cutting not only kills all the remaining roots on contact, but it also leaves a thin layer of the root killing dichlobenil in the drainpipes to help prevent roots from regrowing. It’s important to apply RootX within the first hour after mechanically cutting or jetting the tree roots or wait six to eight weeks. Roots release a resin (think of it like a protective callus) to cover the newly the cut ends of the roots and protect them against further injury. If you apply RootX immediately after cutting, RootX can penetrate the root ends before the callused root coating is complete. After six to eight weeks, the traumatic resin will have dissipated, leaving the actively growing roots vulnerable again.